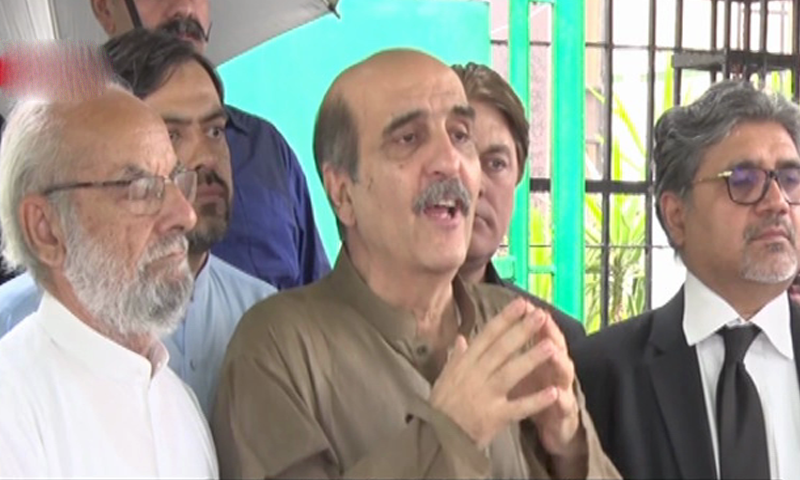 The Election Commission of Pakistan (ECP) on Tuesday reserved its verdict in the much-delayed prohibited funding case — previously referred to as the foreign funding case — against the PTI.

The case, which was filed by party founding member Akbar S Babar, has been pending since Nov 14, 2014. Babar, who is no longer associated with PTI, had alleged serious financial irregularities in the party’s funding from Pakistan and abroad.

The PTI has denied any wrongdoing, and maintains the funding is not from prohibited sources.

A bench headed by Chief Election Commissioner (CEC) Sikander Sultan Raja presided over today’s hearing. CEC Raja remarked that the case against the PTI had concluded, adding that the electoral watchdog also wanted to conclude the cases against other political parties.

He went on to say that the ECP wanted to restore voter confidence and strengthen the country democratically. At the conclusion of the hearing, the commission reserved its verdict in the case but CEC Raja said that the respondents could be summoned again if need be.

During today’s hearing, petitioner Babar’s financial expert, Arsalan Wardak, pointed out that it was an “established fact” that money was received from Britain. He also highlighted that no one was aware of the origins of the money received from Canada.

“Funds were received from Wootton Cricket Limited for which the registration number has been provided. Another $49,000 dollars were received from another company in the United Arab Emirates,” he said, adding that the PTI did not deny receiving these funds.

The financial expert also highlighted that the donor lists were missing several details. “The PTI received funds from 13 countries […] There is no record of the Rs20 million received at the PTI chairman’s office,” he said.

Wardak said that 41 of the 50 banks did not respond to the scrutiny committee’s inquiries, pointing out the possibility of more accounts existing. The PTI ignored the principles and the standards of auditing, he alleged.

He claimed that the donations were made from the PTI’s own companies instead of third-party companies.

When Babar took the stand, he said that for the very first time in the country’s history a political party was providing details of its funding to the election commission. “All political parties should be answerable to the ECP,” he said.

On January 4 this year, the ECP’s scrutiny committee, formed in March 2018 to examine the PTI’s foreign funding in one month, finally submitted its report after 95 hearings and nearly four years.

The report, based on eight volumes of record requisitioned through the State Bank of Pakistan, proved that the PTI leadership had committed gross violations of funding laws by allowing the collection of millions of dollars and billions of rupees without any source and details from foreigners, including Indian nationals and foreign companies.

‘Want PTI to be role model’

Speaking to the media outside the ECP, Babar hailed the fact that the verdict in the case had finally been reserved. He also thanked those who stood by him in the fight for justice, especially his lawyers and his team.

“The objective of this from day one was to make PTI a role model […] that is why we fought this case. I did not have any personal [grudge] or ego [issue],” he said, adding that he had devoted many years to forming the PTI.

“Change automatically comes after you become a role model,” Babar said. He went on to say that for the first time in Pakistan’s history, the founding members of a political party had come forward to make it a role model for others.

He said that he was hopeful that the ECP would not let this “momentous occasion” pass by, adding that it had the chance to change the course of Pakistani politics.

“They (ECP) have the proof, it has the arguments […] don’t look at whether or not the leader of the political party is popular or not […] give a decision under the law and the Constitution with the full force of the law.”

Meanwhile, PTI’s Farrukh Habib called on the ECP to implement the directives issued by the Supreme Court and the Islamabad High Court. He also urged the commission to conclude the hearings regarding the PML-N and the PPP.

“For seven years, we have heard that this is a foreign funding case […] but the ECP also ultimately recognised the fact that it was a case of prohibited funding,” he said.

He also said that the party had provided all the records in the case, highlighting that all the money was received through banking channels.